Agents dance along to their music

Our 2nd Annual Subway Dance Party took place on Saturday, February 21. Around 450 people participated this year, making it atleast 20 times bigger than last years. If you’re unfamiliar with the Subway Dance Party, it’s a very easy concept. Once on the subway, a couple people will begin dancing while listening to music on their mp3 players. At first they get weird looks, and a lot of people laughing at them. Slowly though, more people begin joining in on the dance. Over the next couple stops the dance party gains in size, until the whole subway is in motion, and yet this is all done silently! As the clock ticked closer to 3pm, the crowd in front of me became larger and larger. Groups both large and small arrived, bringing with them people of all ages. Each excited to get on the subway and let a part of themselves go, by dancing wildly in front of strangers. Finally with everyone settled we had each agent hug a stranger, just to get familiar with each other. And then we split into two large groups, each would be taking a separate subway train. The crowd waits anxiously for instructions

The two groups were quickly briefed and then divided into even smaller groups. Each group would be getting on a separate car. Once all ready Train 1, made their way towards Museum Station. 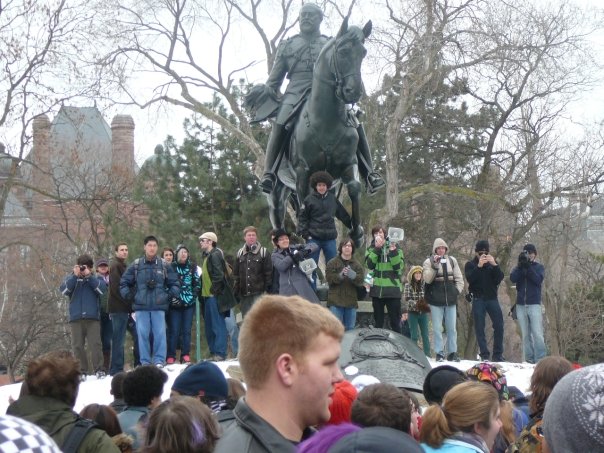 Sadly only one ticket gate was open, which lead to a long backup, to get down to the tracks. Eventually we were all through though, and ready to go. Agents wait for the train in Musuem Station

I quickly ran along the line with my megaphone, informing everyone we’d be getting on the next train. Seconds later it pulled in, and our whole group got on, acting like nothing special was happening. Train pulling into the station

It was really fun, watching at first from an outsider’s perspective. I got on the closest car, and just watched on as the magic started. One guy started dancing slowly, tentatively at first, but he soon gained confidence as a couple more joined in. Many passengers glanced at them in wonder, but then quickly turned away their gaze. One guy wore a heltmet with a camera attached

It only took a few stops, before almost everyone had joined in, and man was it creating havoc. Almost every person watched on in wonder, with a smile on their face. The occurrence was to weird, and exciting to ignore. 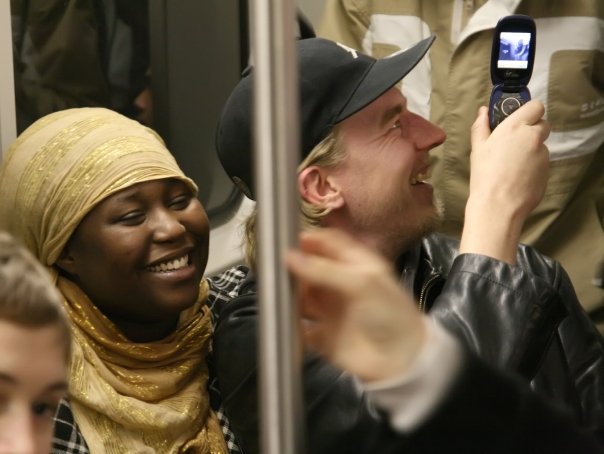 Subway riders look on in amazement Others tried to ignore the dancing

The dance continued as we went around the loop and back up. But as we arrived at Wellesley, it quickly came to a halt. All agents essentially stopped mid-dance and walked off the subway. Sadly the plan had been, to act like nothing happened, but the excitement could not be ignored. As we got off the subway a cheer went up from the group. The switch over at Wellesley

Once off the train, we quickly went around to the other side, and got back on going southbound. From there, we got back on, and ran the exact same mission again, except this time people were a little more confident. The dancing became more extravagant and also a bit wilder. One dancer does some break-dancing moves

As the mission came to a close, we pulled into Musuem Station again. A cheer went up from our agents in celebration and we walked back onto the platform. Some people made up their own dances

The mission was an amazing success with numerous people contacting us afterwards explaining how it made their day. Due to its success, we are planning on running another one this summer! So keep your eyes and ears open. And to make sure you hear about it first, be sure to join our mailing list and facebook group!